Most Epic Bid Pack Battle On SkoreIt To Date

There is not much to say here except DAMN! This is arguably the most epic bid pack battle ever on skoreit. 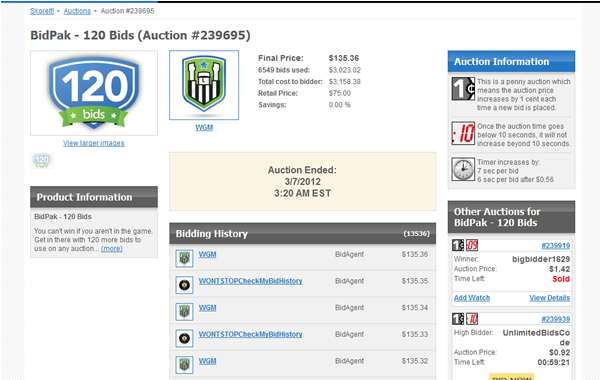 13,500 bids placed trying to win 120 bids. The auction winner would have to pay nearly double the retail price of the bids to claim his 'won' auction.

These guys wives are going to hit the roof when they see the credit card statement this month!

I watched some of this battle… here is some interesting things of note.

My advice? Study up on SkoreIt Strategies and avoid battles like this at all costs. It is going to be virtually impossible for either of these bidders to get to profitability anytime in the near future. Once you take a hit as big as this you have to recoup so much in losses to start to break even it isn’t even funny, or possible. The reputation a 6k bid deep win gets you is hard to parlay into a long term winning position. We shall see how this develops over the coming weeks as the aftermath of this battle settles down.

P.S. a late add, here is a link to another epic bid pack battle on skoreit… (thx jstod for the reminder)!

The Auction Junkie, better known just as "Spry" grew up in the country in the foothills of north Georgia. I began playing competitive games like chess and backgammon at a very young age. I began playing poker somewhat seriously a year before Chris Moneymaker won the WSOP and have been doing so every since. Making the leap to penny auctions came fairly easy as penny auctions are strategic games with similar aspects to poker, chess and gambling in general.
Posted in Blog, Penny Auction News, Tips and tagged skoreit.com. Bookmark the permalink.