SkoreIt has been sold to Beezid.com (See what happened to SkoreIt) The following review is for posterity of my favorite all time bidding site, SkoreIt!

SkoreIt.com entered the penny auction world in February of 2010.  Today they are the most engaging and entertaining penny auction site on the market today.  They are also one of the most competitive.  This page is the ultimate review of SkoreIt on the web! In addition, we have a growing list of real bidder skoreit ratings and reviews to read through. 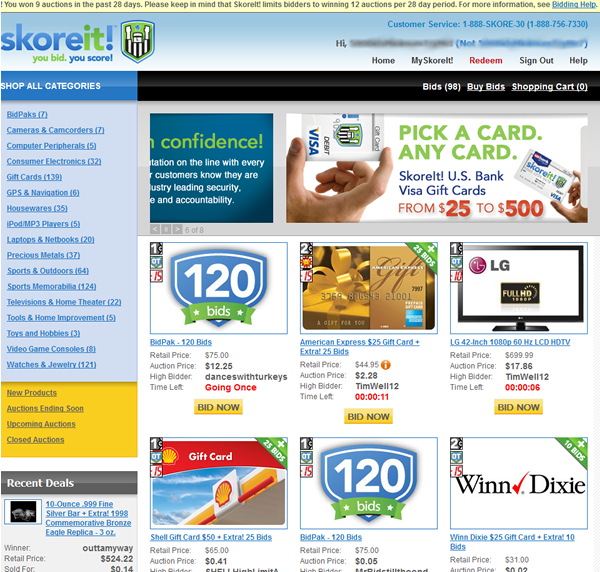 I fully feel that SkoreIt is legit.  I have won multiple auctions since December of 2010 and received each and every one of them.  I have also never suspected the site of shill bidding against me in any form or fashion. They are a large, legit penny bidding site seen advertising on ESPN’s Mike & Mike show.

SkoreIt! is a penny auction site. They utilize a pay per bid business model and offer new products up for auction starting at one penny. This SkoreIt review will uncover what makes Skore It one of my favorite penny bidding sites on the web. You also get access to my winning Skoreit tips, strategies and ideas that have led me to win thousands of dollars worth of products at SI over the past year. 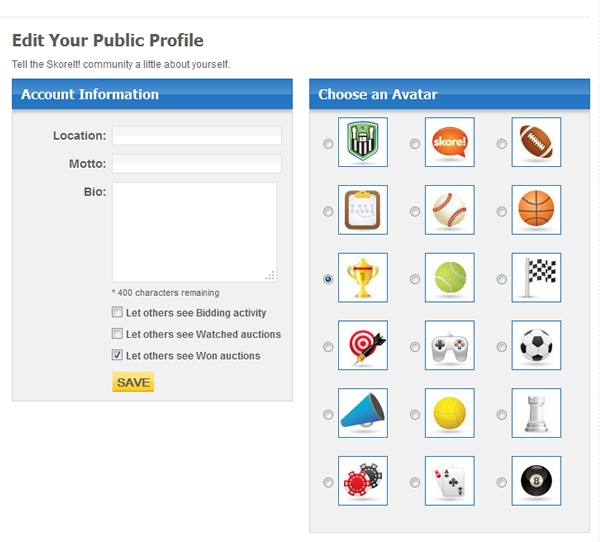 These profile features are pretty much exclusive to Skore it and they allow for a higher level of strategic game play than almost any of the other sites.  The only other site that I might venture to say that is as competitive and fun to bid on is Beezid.com and that is because you can’t win beezid without massive cojones, oh and without learning the beezid strategies that win.

Let’s take a closer look at some of the skore it features and strategic considerations.

History – turn on your history if you have wins with highish bid amounts for items, multiple wins or if you have recently won bid packs.  If you do not have any wins or if the only win on your history is one where you got lucky with a few bids for a pepper grinder then leave yours off.  Also, if you are going after a big item and have won a smaller bid pack it is probably best to leave your history off as the big bidders laugh at those ‘small’ amount of bids.

Your Bidder Age – You can not turn this on or off and age is a lessor factor in general.  However, if you are a newbie bidding on the same day you signed up you are putting a huge flashing bullseye on your back. Even if you do not plan to bid for a while, it is a good idea to create your account now so it starts getting age to it. You need to spend time researching and watching anyway so go ahead now and get your account going.

The Skore It Bid Agent – The Automatic Bidding Tool

SI’s auto bidding tool is designed to give you control over how you bid and to not waste bids.  It bids at specific times instead of just at some random time in the count down timer like the vast majority of penny auction sites.  This control over the auto bidder lets you utilize more strategic maneuvering.  Lets take a quick look at the bid-agent options and some strategy considerations. You should almost always bid utilizing the bid-agent. 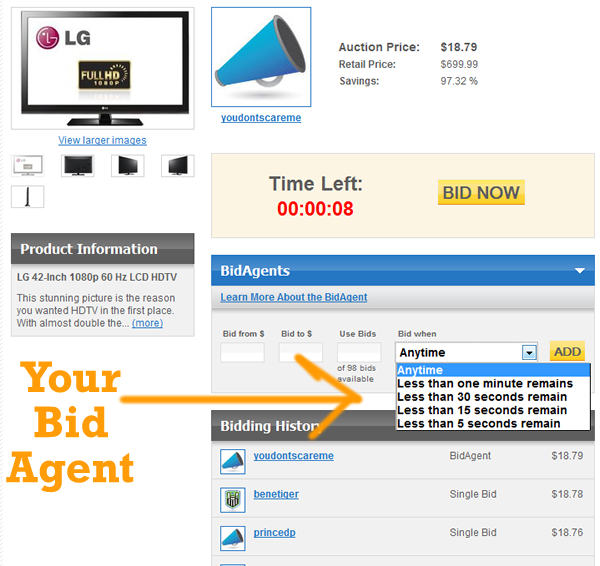 Generally speaking you are mostly either using a 5 second bid agent or the anytime option when you are bidding.

The most aggressive form of bidding possible is the Anytime BidAgent. Consequently it is also one of the most used. One cool feature of the ‘Anytime’ bidding setting is that it bids slow enough to not bid in between people when they bid right around the same time. This is especially useful when you are being bid against at ‘Going Twice’ by a handful of bidders. When this happens, and it is extremely common to be bid against at going twice, then all of the going twice bidders will have their bids placed one on top of the other in sequence. Then your anytime bid agent will bid again on top of all of them using only 1 bid. Instead of sandwiching your bids in between each one. Also, since each bid takes about a second to fire, if another anytime bid agent joins in, you have enough time to react and change gears if you choose. This is different than the sites like Beezid.com that will instantly zip through auto bids in the blink of an eye.

I like to use the five second bid agent when I am against another bid agent and especially when I am against another anytime bid agent.  The reason for this is that the anytime bidagent will pick up all the single random bids placed from newbees or other bidders.  Sometimes a major battle will break out burning up a bunch of the any time bidders bids and the other single bidder competition while leaving yours in tact at 5 seconds.

You can also select what price range you want to begin and end at, however I do not use this as a consideration at all.  I simply put my range from $0-$99 and am either bidding or not once I click the ‘add bid agent’ button.  Please do not use the auction price as your primary consideration for deciding whether or not to bid, this is one of the biggest penny auction mistakes I see bidders make time after time.

The bidding engine on SkoreIt allows for last moment bidding.  If you have a strong internet connection and good reflexes and sense of tempo you can find that sweet spot at ‘Going Twice’ and bring the pain….!!! A skilled going twice bidder can stretch out 100 bids to last 5 or 6 to 1 against the aggressive bid agent.

SkoreIt Count Down Timer –  To be effective at single bidding on skoreit you have to get to know the count down timer.  The count down timer at SI works like the following.  After “5” it reads ‘Going Once’, then ‘Going Twice’ and finally ‘Sold’.  The time between each level of the auction closing is just around a two second tempo each.

The timer counts down with the following: ”7, 6, 5, Going Once, Going Twice, Sold’.  Going once takes 2 seconds, going twice takes 2 seconds and ‘Sold’ occurs somewhere in the first part of the fifth second.

There is a tempo and rhythm that I keep up with by tapping my foot.

I have to tap twice for each of the ‘going’ phases and “Sold” happens when I tap my foot the fifth time, or really soon there after.

Study the count down clock and learn the tempo.  It’s good for seeing how close you are to winning and so you can gauge when you have to place your last second bids if you decide to play defense (being a last moment bidder).

Intial “Tag Battle” – if you are bidding in the high end auctions you should be aware of tag battling, most likely at least. This is the initially skirmish by bidders to establish who is going to be the ‘count down bidder’ that happens shortly after the auction is listed open.  These battles are usually smaller in comparison to getting involved in an auction that is underway and these are not as common or practiced in the medium and smaller auctions.

Auction Battle – this is when the dueling begins and the battling to be the top bidder really gets into full effect.  Usually it means anytime bid agents fighting other bid agents and other single bidders.  Depending on how the auction battle is going will help you determine whether or not conditions are favorable or not to bid.  I will get more into favorable and unfavorable conditions in the in depth skore it masterclass.

Attaining Victory – Being the top bidder when the auction announces ‘SOLD’! You have to win the auction battle to attain victory.   You are near attaining victory when you are the only bid agent on an auction and are only battling single bidders and going twice bidders.

Types of Auctions On SkoreIt

Skoreit offers a few types of auctions and each has their own strategic considerations.

OT vs “Non-OT” Auctions – Buy It Now vs No Buy It Now – it is important to understand the difference between an OT auction and a non-ot auction.  OT stands for ‘OverTime’ which really just means they offer a buy it now feature on this auction.  You can read more about buy it now penny auctions but the short answer is that bidders can apply the value of the bids they placed in an losing effort towards purchasing the item out right.  This effectively takes away their risk.  Auctions with OT in general, have less risk, less reward.  Non-OT auctions mean that any bids placed by anyone except the winner have lost the bid and the money that the bid was worth with no way to regain that value.  One thing to watch out for with the OT auctions is that you are comfortable paying the retail price for that item.

AAA Auctions – This means no bid agent auctions, or ‘All Action Auctions’.  Less barrier for entry for most bidders.  I’ve written strategy on skoreit AAA auctions already but just know that these auctions are more likely to draw a handful of casual bidders so you need to prepare to establish dominance as the aggressor by not letting anyone get to going once.

Items Up For Auction on Skoreit

The shipping in general is speedy.  I usually receive items within 5 days of completing the purchase, give or take a few days either way.  Pricing is average to above average.  Some small things like if you win two items in an auction even though they are shipped in the same box, you get hit with two shipping charges.

We have decided to keep all bidder ratings at our companion site, BestPennyAuctions.net.  You can see how others have rated skoreit and read comments about this penny auction site.  If you are a bidder there we encourage you to leave your comment and ratings there as well.

Are you new to Penny Auctions and just learning about SkoreIt? May I suggest starting out on a site like QuiBids.com that offers 100% of your auctions with a buy it now option and is more of a shopping destination than a competitive battle for bargains or look at our full list of penny auction reviews or our top lists of penny auction sites.

However, if you are somewhat experienced in the world of penny auctions and are looking for a way to take your game to the next level, sign up for my 100% free guide to crushing SkoreIt.com! I call the “SkoreIt MasterClass”.  It is free but I only want to share the strategies with people who really want and will put the information to use so you have to enter your name and email address below.  Do not worry, we do not spam and you can unsubscribe with the click of the mouse at any time (but you will not want to).

Win BIG on SkoreIt! 100% No spam guaranteed! Just enter your name and email in the form above and check your inbox for my 100% free tips that win!