What Is A Penny Auction:
A penny auction is the name given to a website that sells items utilizing a pay per bid business model. Penny auctions are a competition between bidders to be the last person to bid in an auction before a count down clock reaches “SOLD”. If you visit the home page of any of the big penny auctions you will see all sorts of auctions counting down towards zero, many only a few seconds away.

It looks like you can buy items for sale at pennies on the dollar! 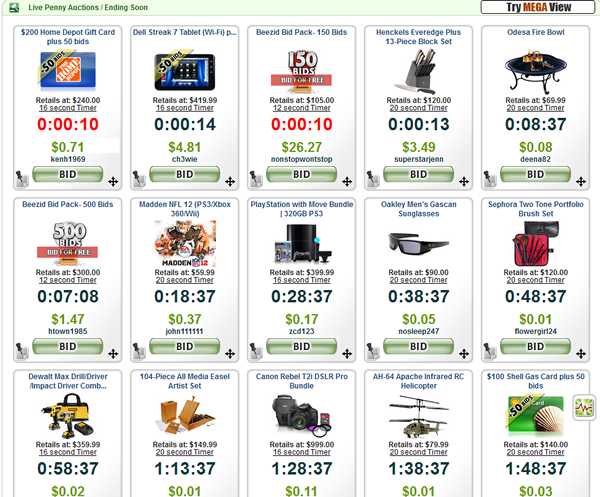 High End Items For Sale Cheap at Beezid - Here is How They Do It!

But there is a catch. Let’s start with the fundamentals of how penny auctions work.

Penny Auction Rules – Where To Start With Penny Bidding Sites

It sounds easy, and it easy to place a bid, but it is not simple to win an auction. Here is why:

So your job is to spend as few bids as possible being the last person to place a bid before the clock counts all the way down.

How Do Penny Auctions Sell Items So Cheap? Are They Scams?

Penny auctions are in the business of selling bids. Not products. Utilizing a pay-to-bid format, penny auctions make money each time someone clicks the ‘bid’ button. 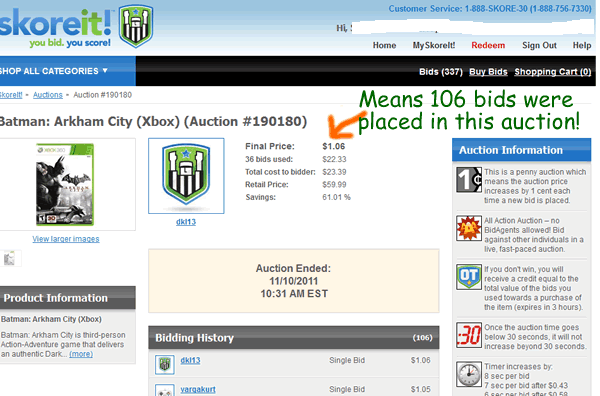 So – the penny auction site earned money by selling 106 bids primarily for an estimated revenue of $64 dollars for the video game they auctioned for just over a buck. They also charge the ending auction price of $1.06 and shipping charge that is usually $5-$12 depending on the item(s) and where it is shipping to.

Even though the auction price ended at just over a dollar, the Penny Auction site generated ~ $64 in the auction. (106 bids x $0.60 per bid = $63.60). The actual price varies because the bid prices vary on Skoreit (more bids you buy the better deal you get). 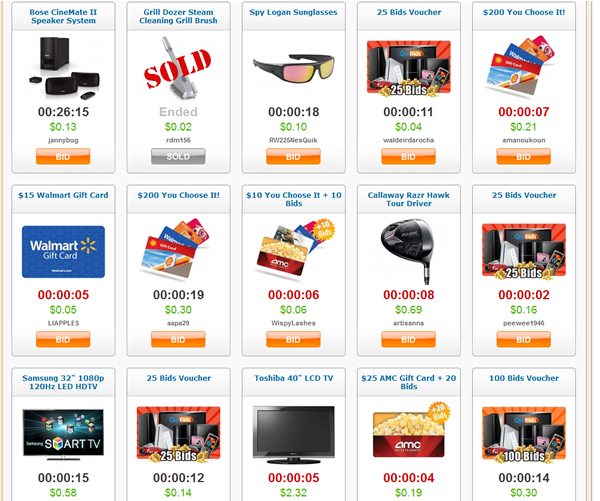 Penny auctions are a competitive game of brinksmanship based loosely on the dollar bill auction theory. I call it a game of ‘chicken’ that costs money to play.

In a nutshell, penny auction sites use a pay-per-bid business model that requires you to purchase bids and use those bought bids trying to be the last bidder standing in an auction that the timer is counting down to zero. If you are the last bidder when the timer reaches zero then you win the right to purchase the item you were bidding on for it’s ending auction price (which is usually huge savings off of it’s retail).

The catch is, that whenever someone bids the auction timer is extended 10 seconds (or some fairly short amount of time) and the ending price of the auction goes up one penny.

The next catch is that if you lose, you lose money and do not get anything. Any bids spent are gone and non refundable. Bids typically cost around $0.60 each, give or take.

Watch this How Quibids Works Video

Keep in mind this is a bit salesy for Quibids. It is not so simple to just bid and win! Be sure you arm yourself with our QuiBids tips and strategies before bidding!

Yes, you can get amazing deals.

However, it is not easy to win. It may look easy, but looks can be deceiving. Penny auctions are completely different than eBay or other traditional auctions you may be familiar with.

They are a strategic game played by the simple rule that each time you bid it costs you money whether you win the auction or not. Bids are generally NOT refundable once you use them trying to win an auction, however you can bid in auctions that have a feature called buy it now “BIN”. These special penny auctions allow you to use money spent on bids towards purchasing the item.

This means that there is risk when bidding. That risk is losing money, or in the case of a BIN auction, risking having to pay full retail, or inflated retail prices for an item. It costs money for every bid placed. So to win, you have to convince the other bidders that you are not going to stop bidding so they may as well stop bidding. They are trying to convince you of the same thing. Once the pay per bid business model ‘clicks’ in your head, the thoughts should turn to figuring out if you can win these.

The good news is that you can win penny auctions.

They are psychological games that are similar to games like poker and chess. If you like strategic games and have a little bit of gamble in you, you will probably really love bidding in penny auction sites. There are people who make significant profit winning items and re-selling them for profit over the long haul. The realistic news is that it is not easy to win penny auctions. Even the best penny auction bidders do not win every auction they enter.

It takes bidding strategy, tactics and execution. If you enjoy competitive games and have a little gamble in you, then you will probably really like and do well in penny auctions. If not, you are probably better off sticking to ebay and craigslist. Penny auctions are not discount shopping!

We have gone over the basics here but there is a lot more to being successful in penny auctions.