One Bid – One Win – Penny Auctions Are Easy

Wow, talk about a nice win. 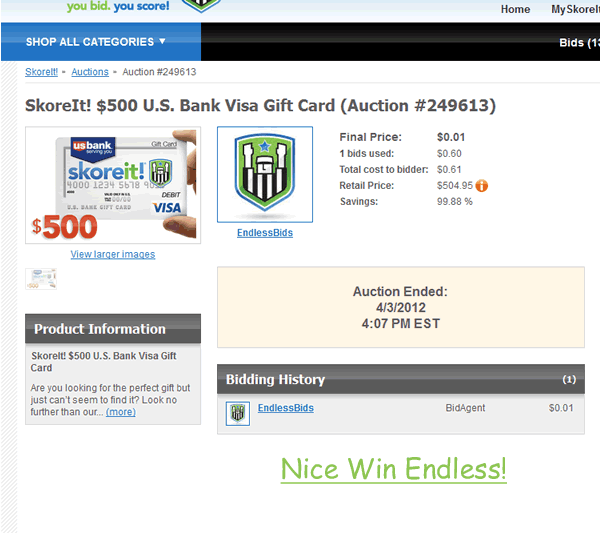 Quite the victory for one of the top winners on SI. I have never before seen such a high value item go for 1 bid. Not even the random newbie places a bid out there? This auction went 15 hours without anyone placing one addition bid from auction open to close.

I don’t know if this is a good thing or a bad thing for SI. You would have to think that they would attract enough new bidders each and every day to have some of them drop some bids on the auction. It is hard to believe that even an established bidder like Endless can win with one bid only. 1 bid, 1 win. $500 bucks, just like that.

Look – me, you, virtually everyone else out there would NEVER be able to pull this off. EndlessBids would not have been able to either without first setting a reputation as a power bidder. So unless you are already a power bidder do not think you can do this. You can’t. I promise. Sure, you can get in there and win some of these (they are all OT now anyway so really whats the big risk?) but getting this kind of deal ain’t gonna happen. I do not want to give that false impression.

Tried HappyBidDay yet? Give them a shot for a site that is big enough to have a nice selection of auctions but small enough to still find great deals.

The Auction Junkie, better known just as "Spry" grew up in the country in the foothills of north Georgia. I began playing competitive games like chess and backgammon at a very young age. I began playing poker somewhat seriously a year before Chris Moneymaker won the WSOP and have been doing so every since. Making the leap to penny auctions came fairly easy as penny auctions are strategic games with similar aspects to poker, chess and gambling in general.
This entry was posted in Blog, Penny Auction News, Penny Auction Promotions. Bookmark the permalink.