I’m glad SkoreIt is doing well, I really am.  However I’ve decided to spend my bid budget trying out some new penny auction sites.  I don’t know if it Is it because of the it is the national advertising campaign with ESPN SkoreIt has been running or maybe it all you guys developing your game after reading through the skoreit strategy guide and starting to crush it?!?

Ha, that would serve me right….!

Anyway, I decided to try a few new penny auction sites and wanted to share my quick thoughts on them in case you were considering trying a new site as well.

I picked two sites listed on www.PennyAuctionSites.com and 1 from BestPennyAuctions.net.

So far I’ve done well on two of them and have not really spent much time on the third one. 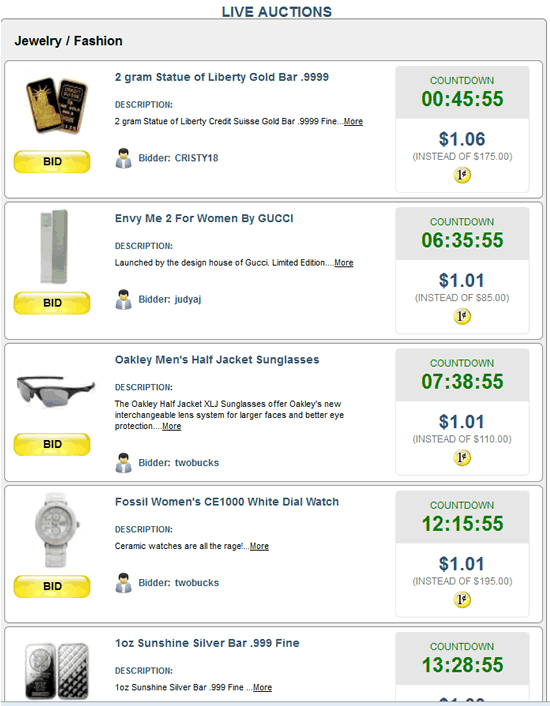 I won a nice bar of gold here at Happy Bid Day!

I like HappyBidDay because I’ve won some pretty awesome deals there and they ship out lightning quick.  I won my favorite watch there, a Seiko “Black Monster” watch.  Check it out here.

Plus the site is smaller over all with few auctions and way fewer bidders.

The down side is that the overall website engagement is not even close to Skoreit.  You can not click on competitions names and see history, your auto-bidder only has 1 setting and it randomly places bids for you in the last few seconds.  You also can not turn your auto bidder off once it begins so in general I use smaller amounts of bids and more bid agents here.

With a little bit of active watching you are able to pick up how the auctions flow and when the auction looks likely to come to an end and pick up some great deals.

I’m out of bids here now but they make it easy to buy them at a discount by using ‘free bids’ to win real bids in auction (happy auctions) and you can sometimes time it to get steep discounted prices. 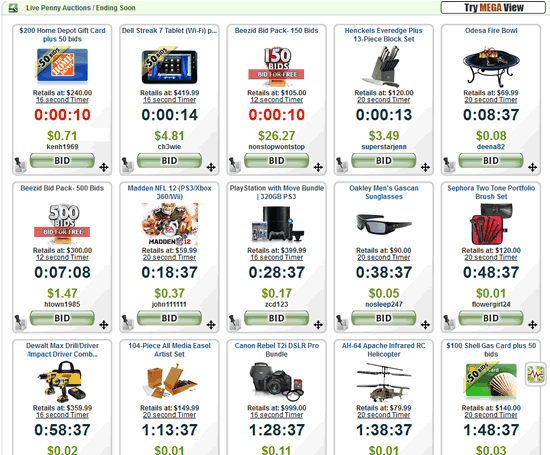 Beezid is bigger than Happy Bid day and runs similar auctions to SkoreIt. Ton's of stuff to win here.

Tons of beginner only auctions made this a no brainer for me.  They call these cherry auctions and they actually have some really good items up for grabs, much better stuff than the other sites I’m looking at right now for beginners.  A Nintendo Wii bundle, $100 gift cards w/ bonus bids, a nice set of wireless speakers and other good stuff that only people who have never won can bid on.

I won a set of Bose earbuds for my iPod in my first cherry auction at Beezid.  However that auction was pretty tough to win and I did end up spending more bids than I was hoping to.

I did pick up Madden 12 for the PS3 for half price and then won my kids a nice Microscope kit for a really good deal.

Beezid is more engaging than HappyBidDay but still not as interactive as Skoreit’s and does not let you click on bidders names to see histories and the auto-bidder works differently.

So far I am not that impressed with the “farm” at RagingBid. The bids are cheap and I still have a LOAD of them.  All of the auctions seem to go on for a pretty long time due to the cheap ass bids.

I have not found the time or interest in a specific auction to spend learning when to bid on Raging Bid yet but I do hope to win a few auctions before I burn through my bids.  I am still optimistic that I can win something on RaginBid but so far they have a modest schedule with limited items I am looking for.

Hope you enjoyed my thoughts on these penny auction sites and good luck out there battling for bargains!